Posted at 22:28h in Graphic Design by Luis
Share

The YouTube logo has been updated for the first time since it began 12 years ago. This is a core aspect of the brand because a logo is the main graphic element that represents a company. The bigger a company is, the more carefully it should implement the design. With its latest update, YouTube has evolved into a clean and conservative logo. It has shifted away from the emphasis from the word “Tube” and redirected the focus to the easily recognizable “play” button. This has a more versatile use in the global world we live in.

YouTube is very important because of the huge impact it has worldwide. It is a window to a world where people can stay connected. Naturally, it has become a big corporation with a large influence on us and as every visual aspect of their look and brand. The website layout, the user interface, the logo design, the characteristic red color and font style are some of the memorable visual elements of this brand. So what can you learn from the YouTube logo refresh released on August 29th, 2017?

YouTube has changed a lot since it started. The video website and the huge outreach they have are different from when they first launched in 2005. YouTube is part of our global modern culture. Just think about a word and search with it on YouTube, and you’ll find tons of tutorials, interviews, music videos and so on. Can you imagine what would you do without it today? We’re used to all the entertaining and learning benefits YouTube offers. For example, the specialized products/services adapted to a variety of different audiences such as YouTube Kids, YouTube Gaming, YouTube TV, YouTube Music, and YouTube Red.

The bigger a company becomes, the more carefully it should take design decisions. We’re delighted to see YouTube didn’t stray too much from its original design. Let us explain why. YouTube is a twelve-years-old video service business that people can remember because of its visual look. It took a long time to make people associate these visual forms (such as its logo), and create a mental image associated with what YouTube is and what it means to each of us.

Making changes to a logo, especially one as recognized as YouTube’s logo, can cause reactions in the global community and alter people’s brand perception. If the logo changes too much or drastically, it can confuse users. Revamping the visual identity means that the company has evolved and they want to show it.

Since it started, the website’s layout, user interface, and so many functional issues have changed; however, this is the first time YouTube has updated its logo. It’s spent almost 12 years consolidating its visual identity. However, when big companies make changes to their branding, agencies need to study it very carefully and ask:  “How much can you change a logo without altering the brand’s recognition?”

In our opinion at Design106, YouTube made a careful, clean, and conservative logo refresh. The YouTube word isn’t visually separated anymore by the red form, which was ingeniously used with another purpose. This update is a cleaner version of the typographic part of the logo because we can read YouTube in a complete black word. It preserves the same font (non-radical or alienating changes for users) but improves the readability as a whole. 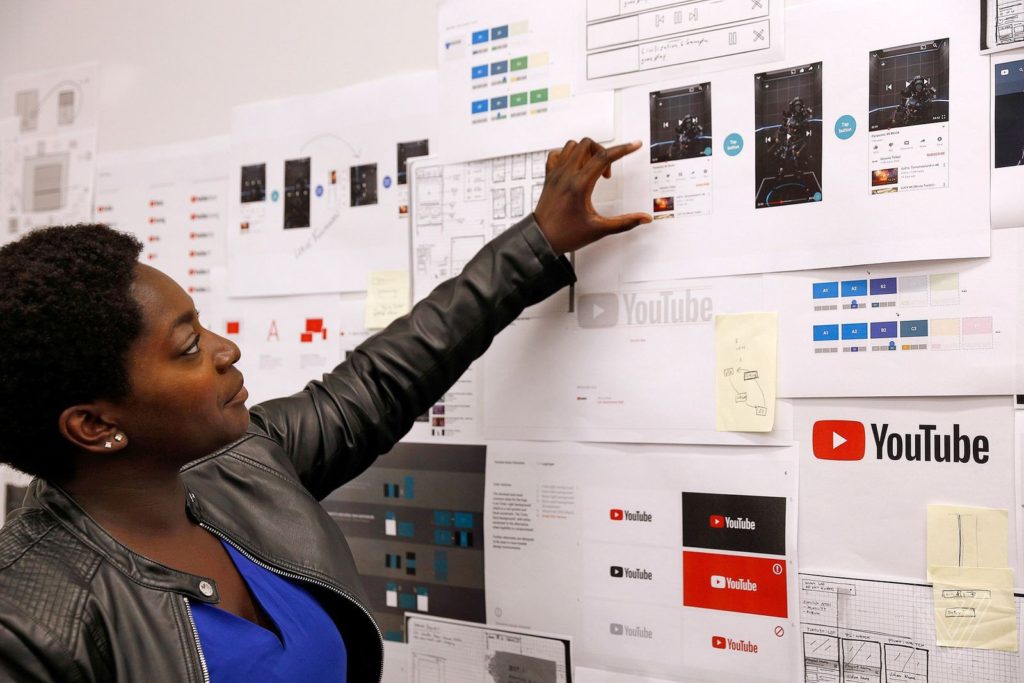 The rounded-corner rectangle has always been eye-catching because of its red color. If the design team had eliminated it from the logo, it will take out a big part of its visual interest and identity.  Instead, they transformed it into an icon that uses a “play” symbol, which represents very well what YoutTube is all about. In the words of the design team leader Christopher Bettig (who also worked for Google):

“We felt, because of all that growth, we were missing the mark. We wanted to make something more unified and cohesive, something that really reads as YouTube… We were hoping to build a visual language that would make it easy for folks to recognize it”.

Everything fits perfectly with this logo revamp. Now the logotype has a highlighted red play button. However, if the red element is used on its own, it still works as a trademark icon for today’s multi-screen world.

The icon with the brightened red color is a logo abbreviation that we can notice easily. We can also read it more clearly on small-smartphone screens; this is a very good improvement as so much web surfing occurs on our mobile phones. The final result is a more useful logo that combines a cleaner version of YouTube’s wordmark and a multi-use icon that works better for many types of devices. Ultimately, they have a more flexible logo design that has evolved instead of a radical change.  What do you think?